The benefits of using FOSS can include decreasing software costs, increasing security and stability (especially in regard to malware), protecting privacy, and giving users more control over their own hardware. Free, open-source operating systems such as Linux and descendents of BSD are widely utilized today, powering millions of servers, desktops, smartphones (e.g. Android), and other devices.[4][5] Free software licenses and open-source licenses are used by many software packages. 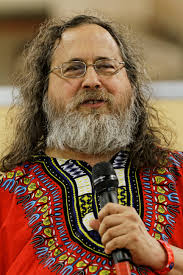 Richard Stallman’s Free Software Definition, adopted by the Free Software Foundation (FSF), defines free software as a matter of liberty, not price.[34] The earliest known publication of the definition of his free software idea was in the February 1986 edition[35] of the FSF’s now-discontinued GNU’s Bulletin publication. The canonical source for the document is in the philosophy section of the GNU Project website. As of April 2008, it is published there in 39 languages.[36]